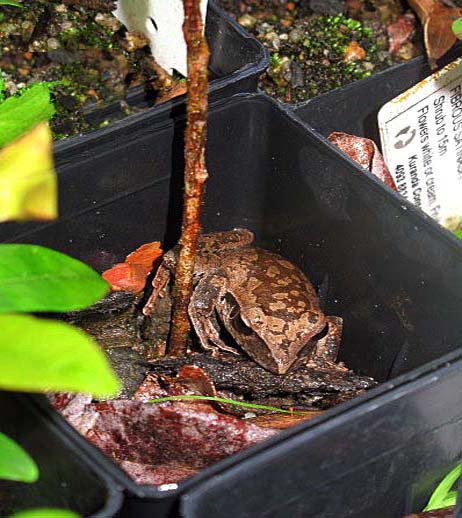 As you  know many frogs are under threat all around the world and this includes Kuranda. You can give them a hand to help your garden and the wider environment by setting up a frog breeding pond. This may be no more than a large ceramic or plastic pot or a wading pool which is high enough to deter toads from breeding there as well. It  needs to be deep enough or in shade to prevent the water from heating so much that the tadpoles can’t cope and die. Guppies will eradicate mosquito eggs and larvae, and will not eat frog eggs.  Once the pond is up and running the frogs do all the work. Pop round to the nursery should you need any advice or plants for the pond.

One of Australia’s endangered frogs is  Litoria myola — Kuranda Tree Frog.  The Dept of SEWPC states, “This frog is found in rainforest near slow-moving permanent and ephemeral streams (Hoskin 2007). All sites from which the species is known are close to the Barron River and between 300 and 400 m altitude. The sites are generally sheltered and experience little wind…. Streams inhabited by the Kuranda Tree Frog are meandering and structured as long, slow pools separated by short, shallow sections of riffles or cascades. The streams are small to moderate-sized, with low levels of flow (except following heavy rain) (Hoskin 2007).  The species has been observed in relatively mature rainforest as well as in areas of regenerating rainforest. The species appears to require reasonably thick riparian forest and is generally absent from sites where only narrow strips of riparian forest have been retained (Hoskin 2007).

Male Kuranda Tree Frogs are encountered calling along streams through the spring and summer months, primarily near riffle areas and small cascades (Hoskin 2007). Males are rarely encountered away from streams. Calling males clump around the shallower, flowing sections of streams. Female Kuranda Tree Frogs are rarely encountered, and those that have been found were visiting streams to breed. A few females have been observed in the mid and upper strata of rainforest trees (both near and some distance from streams) and Hoskin (2007) suggests that this is where they live when not visiting streams to breed.

The Kuranda Tree Frog breeds primarily in spring and summer. Tadpoles live in streams for about two months. Metamorphs have been observed on stream-side vegetation but sub-adults have very rarely been observed in streams, suggesting that they move into the forest to mature (Hoskin 2007). Generation length in the Kuranda Tree Frog is not known with certainty, but is estimated to be 3.5 years…”

Visit the Dept of SEWPC for more information on the Kuranda Tree Frog http://www.environment.gov.au.

Appropriately enough, we have nursery frogs in the nursery. These frogs come from a group which do not have a free-swimming tadpole. They are very small and are known as Microhylids which means ‘tiny tree frogs’. They occur elsewhere in the world besides Australia but within Australia, they are confined to the Wet Tropics. They are called nursery frogs because they lay a small clutch of eggs in very moist soil under rocks, logs and leaf litter. The eggs are coated with a special anti-fungal agent to help the eggs survive in a wet environment. The tadpole actually develops inside the egg and when it has completed metamorphosis, it simply hatches from the egg. 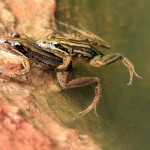 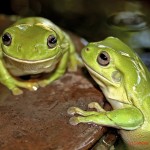 Hoskin, C.J. (2007). Description, biology and conservation of a new species of Australian tree frog (Hylidae: Litoria) and an assessment of the remaining populations of Litoria genimaculata Horst 1883: systematics and conservation implications of an unusual speciation event. Biological Journal of the Linnaean Society. 91:549-563.