Visitors reported a ‘sleeping cassowary’ in the forest. On investigation, Missy was found, dead apparently for a couple of days. KCons took her over to the Kuranda Vets.  There were no outward signs of injury – vehicle strike or dogs or fighting with another bird.

The Kuranda Vet, Andrew Easton, reported that Missy died from a ruptured bowel with early onset peritonitis.  And, apparently she had a scar showing previous chronic bowel injury.  Nothing remained in the bowel that might have caused the injury.

Sue and Phil Gregory at Cassowary House will be particularly sad to hear this news.  Missy has regularly visited Cassowary House for many years. Sue will probably say “since birth”.  “Dad” came forth with one chick this year, about one month ago.  Dad is now well over 40 years old, about the age it is expected he will be losing his virility.

It will be interesting to see how the ranges these two birds have occupied for decades is populated by younger birds in the area.  This might see the end of the pattern we have enjoyed for so long.  This year’s chick may prove to be the thread of connection that  will see the beginning of a new cycle with younger birds.  Hopefully, if this does occur, the new birds will find themselves in a safer environment, made so by greater awareness of its human occupants for the need to travel slowly and restrain our dogs.  If this is the case, we will have made progress. 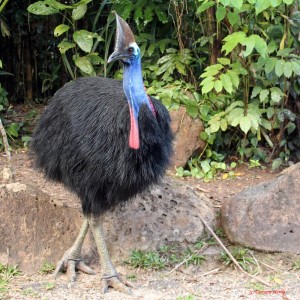