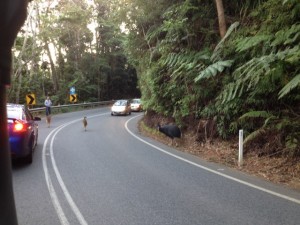 Cassowaries on Kuranda Range Rd May 2014, photo G. Hannah, 6.30pm peak hour Friday. Two local men halted traffic, almost certainly saving this family. The man in the pic below has a phone in hand trying in vain for a signal in order to alert agencies, incl  Main Roads and Dept Environment and Heritage. Cover is almost impossible on the Kuranda Range Rd. This was not the first time local residents have assumed traffic control duties to save the birds.

The cassowary family that made the environs of the Range Road have not been observed on for some time now, so we must assume that they have moved to other areas providing  food which have come into season.  Please remain alert for cassowaries though, they do cross the highway from time to time to forage.

The cassowaries continue to haunt the Kuranda Range Road and it is obvious they are aware that this is an area where food is readily available. They have been observed approaching cars and buses, something that in normal circumstances they would not do. Contractors and workers on the Range have been briefed about this issue and no food scraps will be left on the range or anywhere near the range. We hope that this blog will reach a wide audience so that everyone will know to follow the same rule. Do not feed the cassowaries – it is dangerous for them and for you and others.

The first danger is most obvious – car strike and death or injury to the cassowaries. The second danger is to people. A cassowary which knows that people provide food does not know that not all people will provide food at all times. The bird can sometimes seek to remind them by acting aggressively. Like all wild animals, cassowaries are unpredictable. They are also very large. It is our responsibility to care for them and preserve them. Feeding cassowaries leads to disaster: a fed bird is a dead bird. 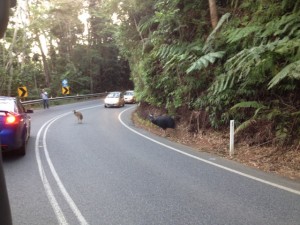 Please pass this information on to your networks.

1. The male  cassowary and remaining two sub adult chicks are still crossing the highway on the range road – the last sighting was between Henry Ross Lookout and the top of the range, but they are obviously crossing at different places.

2. In the last week, a sub-adult cassowary was sighted crossing the western end of the Kuranda Range Road (Kennedy Highway) between Saddle Mountain and Black Mountain Roads – not far from the Barron Bridge. The speed limit at this location is 80 kph in both directions, so a very risky place for the bird to cross.

The cassowaries seen on the Kuranda Range Road near the Henry Ross Lookout could be affected by habitat loss and have increased their range to search for food.  Another possibility is that the parent bird is a new male occupying the territory from a bird that was killed or died of starvation or mishap.

Please drive very carefully and do not approach the birds too closely – you may scare them into crossing the road into the path of a vehicle. Above all, do not feed the cassowaries on the roadside.  This teaches them that cars bring food – and death or injury.

See Background (at the bottom of this page) for more information on cassowaries. 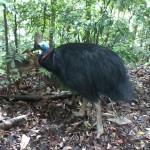 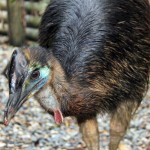 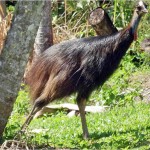 The cassowaries have not been sighted recently so perhaps the fruit they were seeking has finished. Thanks very much to all who alerted KCons and other agencies and who assisted in other ways, but please continue to keep an eye out for them let us know if you sight cassowaries at any time, especially on the Kuranda Range Road which is an exceptionally dangerous place for these birds to negotiate.

Good News.  We can happily report that rangers from the Qld Parks & Wildlife Service (QPWS) have become involved with our efforts to avert death or injury to the male cassowary and his three juvenile youngsters which are frequently seen on the Kuranda Range Road between the Henry Ross Lookout and Water Point.  The rangers have visited the area and put up more signs.

QPWS is also talking to other departments now with a view to upgrading permanent signs and are willing and interested to work and consult with us.

We have now established contact with several radio stations and upon receiving a call from you, the public, to say the birds are playing roulette on the road, we let the radio stations know and they are immediately notifying listeners of the situation.  Jax was interviewed on Radio 4CA today and was able to discuss some more pro-active action that might be taken to divert the cassowaries before they reach the road.

It’s always gratifying when influential people and government departments come on board and action is taken.

KCons again rang the TMR (Dept Transport and Main Roads) as soon as we heard of the situation on the KRR. They circulated the info on their website and organised RoadTek to supervise the traffic.  Soon after the birds left the scene and RoadTek stood down.

KCons has written to TMR to seek some more permanent answer to the birds accessing the KRR and await a response.

KCons is also attempting to contact the top relevant person at EHP (Environment and Heritage Protection) to discuss more pro-active action that might be taken.

As the primary Cassowary Care group for Kuranda, KCons continues to receive calls reports of sightings of a cassowary family on the Kuranda Range Road.

A male cassowary and his two remaining chicks are moving around in areas from below the Water Point below the Henry Ross Lookout to the very top of the range road. A sub adult cassowary has also been sighted near the Barron Bridge on the Kuranda Range Road (Kennedy Highway) . The cassowaries are crossing the highway often causing chaos to traffic in both directions. Be Aware signs have been placed near their crossing sites.

Please do not approach the birds to touch them or to take photographs (that’s what zooms were invented for!). You may frighten them into running out onto the road and being injured or killed and causing an accident to humans as well.

Please do not feed the birds under any circumstances. They now consider the range road to be a prime source of food and are being seen much more frequently. As noted in Update 5, this is dangerous to both the cassowaries and humans and could prove fatal.

Note for visitors to the area: it is very dangerous to stop on the highway. There are few places to pull over safely. The road is narrow and very busy with numerous large trucks as well as cars and bus traffic. The accident rate is high.

Cassowaries are an endangered species principally because of habitat loss. Removing even a few mature trees can have a significant effect. However, food trees on the verge of a busy highway, such as the Kuranda Range Road, may be luring the birds to their death.  It may be worth considering planting cassowary food trees deeper in the forest then removing fruiting trees where they put the birds in harm’s way. Car strikes and dog attacks take a huge toll. The second reason is that food scraps also attract the birds to this dangerous place and the birds now seem to regard it as a primary living space – a logical conclusion if you are a cassowary.

The home range of individual  cassowaries is not certain, it probably depends upon the food supplies available. Estimates vary from between 1 and 11 square kilometres. Their diet includes small reptiles, frogs and insects, carrion and fungus but especially the fruit of rainforest trees. Individual trees of many rainforest species do not fruit every year (some fruit at up to 25 year intervals) so the cassowaries must always range widely to sustain themselves.

The male cassowary sits on the eggs and hatches the chicks, and then cares for them until they are old enough to make their own way in the world. This cassowary was originally sighted with 4 chicks, however there are now only two to be seen. The young birds are now at the juvenile stage – they have lost their baby stripes and are light brown with some of the adult black colour beginning to appear. The male cassowary will probably mate in 3 or 4 months and leave his young to make their way in the world. Because the cassowaries are being fed, these juveniles may have already imprinted the Kuranda Range Road as their primary feeding area, which will lead to their certain death.

Thanks to everyone who has let us know about the birds, and are alerting others including the press and government departments. Thanks to all who are taking extreme care, and to those who are NOT feeding the birds.